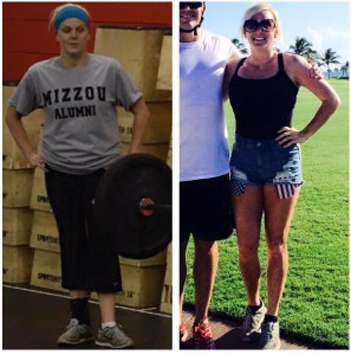 “I started Broad Ripple Fit Club in the fall of 2013. I had recently turned into a “grown up” and was dealing with the sucky side of it: bmv, taxes, doctors, bills, responsibility, bills, bills…….and weight gain. I had gained around 30lbs since I graduated college. I was so embarrassed. I knew I had to make a change and it had to be a serious one. That’s when I found Broad Ripple Fit Club.
My first assessment went as well as I expected. I didn’t feel like I was going to die, but I knew it wasn’t going to be easy. I spent two weeks in the 101 class and at the end of August I was ready for my first class. I was a wee nervous but also excited. I was ready to run the Monon for our first WOD and about 10 steps into my run I tripped on a rock and sprained my ankle. Honestly, I just wanted someone to put me down. Jeff had to actually carry me off the Monon. I was mortified. A few weeks later I swallowed what little pride the Monon had not stolen from me and I went back. This was the best decision I’ve ever made.
A year and a half later I’m 25lbs lighter, stronger and more confident than I’ve ever been in my entire life. Crossfit is still a continuous learning experience for me. It’s always hard and always makes me push myself, which I love (and I need). I don’t care about being “skinny” anymore, because I’d rather know I can back squat your boyfriend or push press your grandma.
The best part about Broad Ripple Fit Club is being surrounded by a group of people and coaches who are all working towards a common goal: being strong and healthy. We all push each other to reach our greatest potential and it’s that motivation that keeps me coming back for more. It’s so cool to look back at where I started and see how far I’ve come. I have my coaches and Jeff to thank for that. I love my gym and would encourage anyone I know to join this awesome-sauce community.”

Registration for our Broad Ripple Lift Off is LIVE!